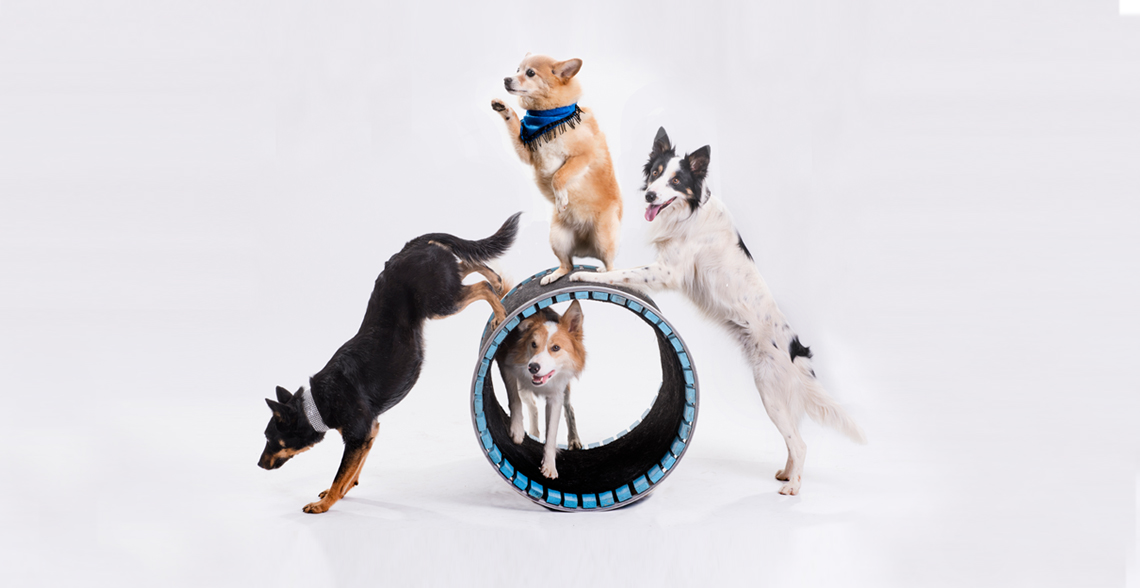 Come see the highest jumping dog in the world and her amazing canine cohorts in an all-star revue of doggie derring-do. They’ll have you at WOOF!

Imagine nine of the world’s most talented 4-legged performers in an uproariously funny, comedy dog spectacular and you get Mutts Gone Nuts! The all-star lineup includes the highest jumping dog in the universe, two Guinness World Champions, a hilarious six pound Pomeranian Pikachu mix, and a host of previously discarded dogs that will dance, prance, flip, and skip their way right in to your heart. The family friendly show runs 75 minutes and was created by veteran comedy team Scott and Joan Houghton, who performed their duo act ‘Jessie & James’ on variety stages from Tokyo to Las Vegas. In 2014, the Houghtons joined forces with dog trainer extraordinaire, Samantha Valle, world class comedian Jonathan Burns and nine adorable pound puppies to create an action packed, comedy dog spectacular.

All of Mutts Gone Nuts’ dogs were adopted from shelters or from rescues. Sometimes the very behavior that drove the previous owner to relinquish the dog, becomes the dog’s star quality. Mutts Gone Nuts’ trainers use ‘positive’ force-free training methods. They look for the dog’s natural talents by getting to know their individual personalities. Once they find out what the dog likes to do, they reinforce those behaviors with treats and/or toys. Co-producer and emcee, Scott Houghton says “I feel lucky to have come into dog training at a time when force-free, positive training is the gold standard”. Positive training not only helps build the trust bond between you and your dog but it makes it fun for the dog and the trainer. When dogs perform behaviors they are naturally inclined to do, they are happiest. When not on tour, Mutts Gone Nuts’ furry cast members have the run of three fenced acres, and of course they all live in the house (some even sleep in their bed).

Deemed “A must see!” by the Washington Post the dogs will not only amaze you, they’ll steal your heart, and maybe your socks! Mutts Gone Nuts is sure to win Best in Show!